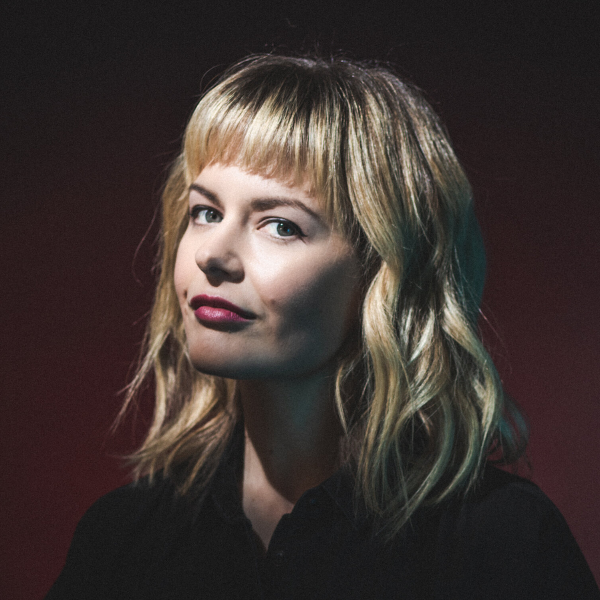 with Petey DeAbreu and Sydnee Washington

Finding success as a writer, actor and stand-up comedian, Rosebud Baker has seen her stock rise in the comedy scene. She was featured as a "New Face" at the prestigious Just For Laughs comedy festival in 2018, and she's finding more fans through her appearances on Comedy Central and through her podcasts. She's back with us this spring, headlining our main room for the second time and showcasing her brand of personal and dark humor.

Rosebud Baker is a New York-based comedian, writer and actress. Her intensely personal, remorselessly dark brand of humor has made her a favorite on the comedy scene. With a recurring role in a new Hulu series, her own Comedy Central hour standup special "Whiskey Fists," and Vulture declaring her one of the "Comedians You Should and Will Know of 2021," Rosebud is having a breakout year.
"Whiskey Fists," produced by comedy powerhouse Bill Burr’s company All Things Comedy, finds Baker exploring everything from being in an abusive relationship to her love of dogs over humans. Also coming up, she will be seen recurring in the Hulu series "Life & Beth" alongside Amy Schumer and Michael Cera.

Rosebud was a writer on "That Damn Michael Che," the hit HBO Max sketch series from Saturday Night Live’s head writer and "Weekend Update" co-host Michael Che. She also appeared on HBO’s "Pause with Sam Jay." In 2018, Rosebud was a standout in the Amazon Video docu-series "Inside Jokes," which tracked her journey to becoming a "New Face" of comedy at Montreal’s prestigious Just For Laughs Comedy Festival that year. The Village Voice named Rosebud as "The Very Best of Just For Laughs New Faces Showcase," saying "Baker’s no-nonsense, wickedly dirty routine cut through the evening like barbed wire." Additionally, she was featured on "Bill Burr Presents: The Ringers," Will Smith’s "This Joka," and Comedy Central’s "This Week At The Comedy Cellar." She was also a writer for Comedy Central's "The Roast of Alec Baldwin."

In addition to her TV and standup projects, Rosebud hosts a popular weekly podcast through All Things Comedy, "Find Your Beach," with her now-husband and fellow comic Andy Haynes when they were quarantining together during the pandemic in Los Angeles hoping their relationship could outlast the coronavirus. The Washington Post gushed "The atmosphere they’ve created ... is a pitch-perfect encapsulation of an increasingly common experience, of being stuck at home with loved ones while anxiously tracking the news."

Repping the streets of the Bronx, NY Petey DeAbreu is a fast-rising star on the New York City comedy scene. He has appeared on Comedy Central Digital’s Up-Next series and is a regular at comedy clubs all over New York City. He recognized the power of humor at an early age, using it as a pre-emptive strike to keep from getting into fights at school and around his hood.

Petey loves to take crowds on unexpected journeys and believes his feel-good style cuts through prejudice and provokes laughter without boundaries.

Originally from New York City but raised in Oakland, California. Growing up with a backyard and a big wheel really has made her more approachable than most New Yorkers. Sydnee Washington hosts a high energy monthly Comedy show in the Lower East Side called “The Warm Up”. Currently a cast member in MTV international tv show “Vidiots”. Solo show “Death of a Bottle Girl” at The Duplex Cabaret Theatre. Residency at “The PIT Presents” for 2016. Eugene Mirman Comedy Festival 2016. “The UnOfficial Expert” Podcast with ComedyHype. Has appeared in AustinMartinez Music Videos on TruTv “Late Night Snack” and various YouTube videos for GQ and Elite Daily.